Qmee is an app that you install on your browser. It claims that you can earn money simply by browsing the web and clicking on ads.

The idea is that you search on Google or Amazon as usual. If you search for a product that happens to be promoted

by one of their partners, a special Qmee sidebar will pop up showing featured ads that will either pay you a small fee to click on them, or offer a discount shopping code. If a fee is available, this will show on the ad.

Qmee claims that their app does not change the search results. This seems to be true, as far as I can tell. When you search for a product in Google, the Google search page will show as normal. The Qmee results show in a separate sidebar and are not integrated with the Google results.

Qmee also offers the opportunity to earn money through completing surveys on their website.

Show me the money

So, how much can you make with Qmee?

Individual ads pay between £0.04 and £0.08, based on what I’ve seen. However, the paid ads are few and far between, and you can usually only click on a maximum of two in one session.

I have only seen one available survey, which promised £0.54 for a 15 minute survey.

The main advantage to Qmee is that, unlike many similar money-making apps, you can cash out any time. There is no minimum cash out amount! Your earnings are paid to Paypal and clear instantly.

I am not impressed with Qmee.

I have been using it for two weeks now and made the grand total of £0.42. And it’s not through lack of trying! I made an effort to do a few Qmee-friendly searches every time I was at my computer, but the truth is, there are very few paid searches available.

Since the money comes from Qmee’s partner companies who basically just want to get you onto their websites, I tried searching for luxury goods and expensive services that I thought might want to sell to me. I had some luck early on searching for car insurance and cheap flights. Also a few different types of clothing or shoes. After that, the offers completely dried up. Most of the time I never got any results, and when I did, they were usually just discount codes, not paid ads.

I feel like they could probably tell that I was trying to play the system and punished me for doing to many searches or something. That’s fair enough, but I have no idea how anybody manages to make any money doing this!

Maybe if you do a lot of online shopping anyway your search profile would be more natural and you would get more paid ads. But unless you sit at your computer shopping all day every day, I don’t think you will make more than pennies.

Also, every single time I opened my computer I had a notification from Qmee saying that surveys were available. But whenever I clicked through to the site, the surveys were all gone. I only managed to catch one survey – and had a technical issue half way through which meant that I couldn’t finish it!

What are they hiding? 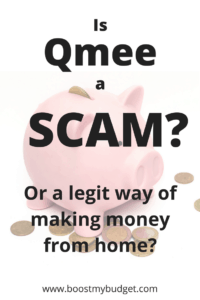 More than that, Qmee just feels a bit scammy to me. I did receive the money I was owed, but something doesn’t sit right about the website. It’s hard to find the information you need to get started, and their FAQs are deliberately vague.

For example, under the question ‘how much can I earn?’ Qmee state ‘Some Qmee users are earning thousands just by referring their friends!’

Really, thousands?! How can I get in on this?

Way, way further down the page it explains that you can only invite your friends ‘once you’ve been with Qmee for a while’. Then, once your friend earns their first payment, ‘you’ll earn a reward in your piggybank.’ No mention of how much reward, anywhere on the site.

In the same vein, there are a few references to the fact that you can apparently request your payment in gift cards. It doesn’t say anywhere which shops these cards are for, or if there are any other conditions attached to the gift cards (such as minimum amount). I tried to check just now, but since I have already cashed out my account, I can’t see any options for cashing out with gift cards.

Like I said, the whole thing feels a bit off. It’s just too much effort for very, very little money. As a result, I will probably uninstall Qmee now I’ve given it a shot.

At 42p after two weeks’ searching, Qmee is not even worth the time it took to install!

Your time is much better spent on almost any other way of earning money from home. My current favourite earners are matched betting and testing websites.

***UPDATE 15 January 2017: I know I said I would probably uninstall Qmee, but I didn’t get round to it. I did, however, stop actively using it (i.e. trying to search for things I thought would bring me paid ads). Since then, I’ve made about £1 a month without trying – just in the course of my usual Google searches. Not much money, but I’ve decided it’s worth keeping Qmee around just in case!***

Have you had any experience with Qmee? Let me know in the comments! 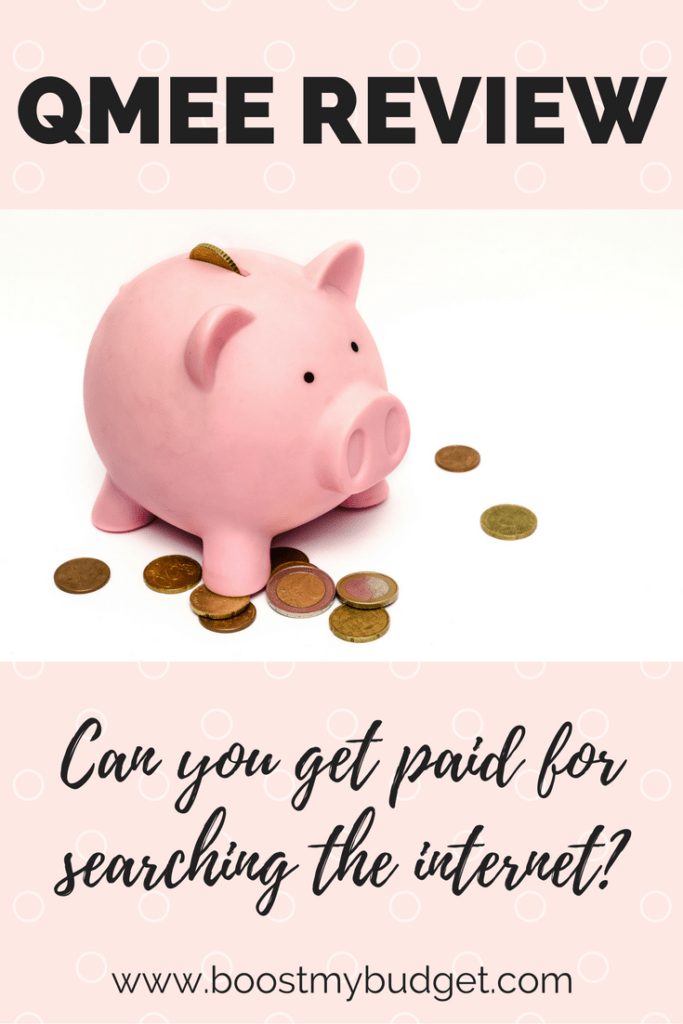