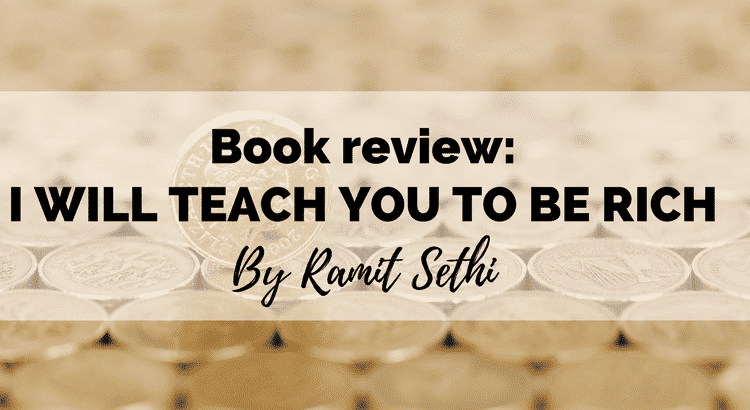 Disclaimer: this post contains affiliate links. All opinions are my own.

As part of the Boost My Budget project I’m challenging myself to read one personal finance book every month! See my previous reviews here.

This month’s review is I Will Teach You to Be Rich by Ramit Sethi.

I’ve wanted to read this book for ages. With a name like that, how could you not?

I Will Teach You to Be Rich is a crash course in money management for young people who aren’t really interested in personal finance.

It’s structured around a kind of six week course which covers all the personal finance basics. The idea is that you work through one chapter a week, and at the end you’ll have a money set-up that will be easy to maintain and leaves you to focus on more exciting things in life.

Here’s Ramit’s aim for the book, according to the introduction:

‘After reading this book, you’ll be better prepared to manage your finances than 99 percent of other people in their twenties and early thirties’

And here’s what the crash course covers:

Each chapter has action steps at the end for you to work through. There are also loads of awesome extras, both in the book and on the website. There are downloadable spreadsheets, scripts for phone calls to your bank, and tons of useful links.

If you’re serious about getting your finances sorted, and you follow all the steps in this book, I really think you will be better off than 99% of people as Ramit promises.

However, it is all pretty basic stuff. If you’re already a bit of a personal finance buff, you probably won’t find anything groundbreaking.

There was nothing really new for me in I Will Teach You to Be Rich. But then, that’s because I’ve spent the last 10 years figuring these things out for myself – slowly and painfully.

If I could go back in time and give this book to myself at age 20 I would. I’d probably have a lot more in the bank now!

This is basically the kind of Personal Finance 101 that you wish was taught in schools.

The name is a bit of a misnomer though (what’s the book equivalent of clickbait?). This book doesn’t teach you how to be rich. But it does teach you how to manage your money, simply and effectively.

If you follow all the advice, you should stop hemorrhaging money on things like unnecessary credit card fees, and you’ll start investing, which is the key to eventually building wealth.

But you won’t become a millionaire following these steps, unless you a) have an extremely high income, and/or b) increase your investments significantly from Ramit’s recommended 10% of salary.

A note for international readers: Ramit is American, but the copy I read has actually been adapted for UK readers. It is really well researched and there is lots of very specific advice about different kinds of pension plans, ISAs and so on. I’m not sure if there are editions for any other countries. If you’re not from the US or UK, you can still benefit from the basic principles in this book, but there are a lot of country-specific terms you’ll want to skim over!

Well, it’s not for everyone.

I Will Teach You to Be Rich is aimed squarely at people in their twenties, and I would say mostly single people with a decent amount of money coming in. If you’re older and have a family, you might not find it so relatable.

That’s not to say you don’t need the advice in this book – there’s still loads you could take away. But most of the case studies seem to be recent graduates.

Also, the language can get kind of grating. It’s written in a very casual style which just feels a bit forced to me. Ramit addresses his readers as ‘nerds’ and ‘crybabies’, and is obsessed with calling everything ‘sexy’.

Some parts veer into downright sexist language that made me cringe. For example, there are parts where he makes a really tortuous analogy between picking a bank and picking a stripper, and compares pensions to a hot girl with a boring name. I read a few other reviews, and noticed that other female reviewers said the same thing. Funnily enough, none of the male reviewers seemed to mention it!

I’m not really sure why Ramit does this, because he’s otherwise a good writer. Most of the book is funny and engaging. The crass bits just don’t add anything. I get that he’s writing for 20-something college boys, but you’re either interested in learning about money or you’re not. Surely you’re not going to become magically enthralled in optimising your credit cards, just because he throws in a reference to ‘hot girls’ every 30 pages or so. Or maybe I really overestimate 20-something boys!

A couple of other minor points I noted:

I Will Teach You to Be Rich is a really fantastic book for anyone who wants to get their money stuff sorted but doesn’t know where to start. It would make an awesome gift for students, or anyone else out on their own for the first time. But you might want to give it a miss if you’re not in the target demographic.

Here are some of the other titles on my reading list. Have you read any of these? Any more recommendations for me? Come back soon for more reviews!