This week I’ve got another great money making app to share with you.

This app pays very well, it’s fun to use, and doesn’t take much time out of your day.

The app is Task 360. In this review I’ll tell you how it works and how much you could make!

Update: since this article was published, Task 360 is now known as BeMyEye, but the tasks and earnings are similar!

Task 360 (now BeMyEye) is an app that pays you for small research tasks.

The tasks include things like checking whether a product is on the shelves in a certain shop, checking on a special promotion, or verifying the name and address of a particular venue.

Usually, brands are paying for these checks because they want to make sure their data is correct or that shops are following their display instructions.

Most tasks take less than 10 minutes to complete. A typical task involves answering 3-10 short questions on your phone and taking 1-3 pictures.

Each task pays from £3 to £8 each. And considering they only take 10 minutes, that can add up fast!

The app is available for iOs and Android (note that it’s now called BeMyEye!)

(Updated note: since this article was originally published, Task 360 has been bought out and is now known as BeMyEye. Be careful because Task360 is still available in the App Store but you won’t get any tasks! Download the BeMyEye app instead.)

You’ll need to allow data services to use this app, and I also recommend enabling notifications so that you’ll know when new tasks go live.

The main screen is a map, which shows any tasks near you. Click on the pin to see the fee and details. You can also click on the icon in the bottom right to see a list view. You can click through on any task to see a full description. 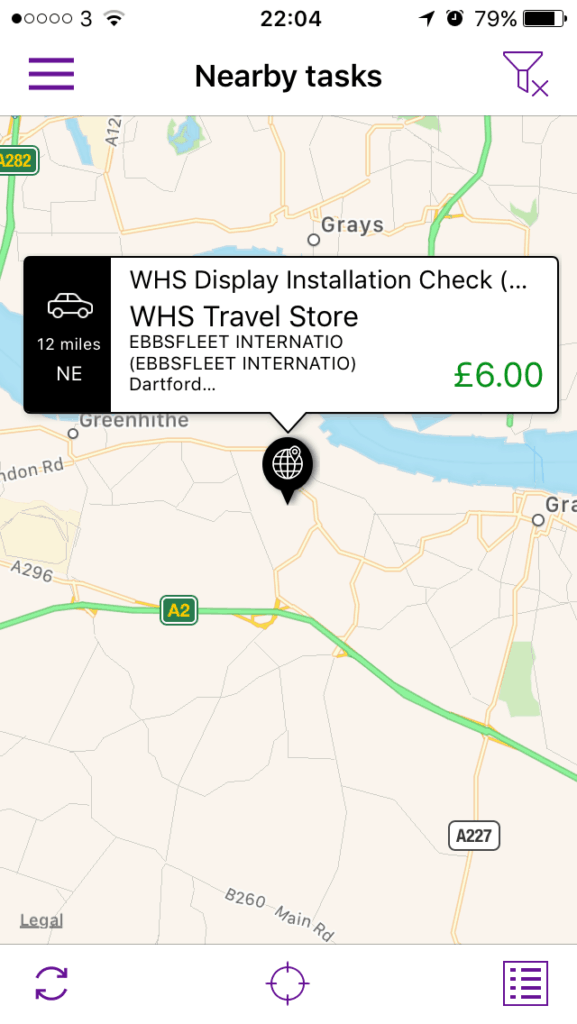 If you find a task you want to complete, simply click on ‘reserve’ at the bottom of the screen. Once you’ve reserved a task, you must complete it within two hours. You can reserve a task before travelling to the task location – just as long as you can get there in time.

If a lot of tasks become available at once, make sure you only reserve the jobs that you will have time to complete! If you don’t submit a task in time, you might be restricted from future work.

Once you are at a task location and ready to start, find the task under your ‘reserved tasks’ list and activate it. The app will show all the instructions and questions on the screen, one by one.

At the end, there is usually a box where you can give any feedback or comments. If you had any problems completing the task, enter it here. If you miss out part of the task with no explanation, you might not get paid.

>> Related post: The Top Paid Survey Sites in the UK

Each type of task has a different fee, so make sure you check before you start. The fees are typically from £3 to £8. The average that I’ve seen seems to be about £4.50.

However, here’s the thing:

There aren’t always a lot of tasks available. And when there are new tasks, they often get snapped up quickly. Sometimes I see tasks come online in the morning while I’m at work, and wait for within two hours of my lunch break to reserve them. But they often go before I get the chance!

I think most people can realistically aim to make £10-£20 per month from Task 360. But if you live in a city and/or travel a lot, and can grab tasks as soon as they become available, you can make a lot more!

Task 360 pays by PayPal, and you need a minimum balance of £10 before you can cash out.

My experience with Task 360 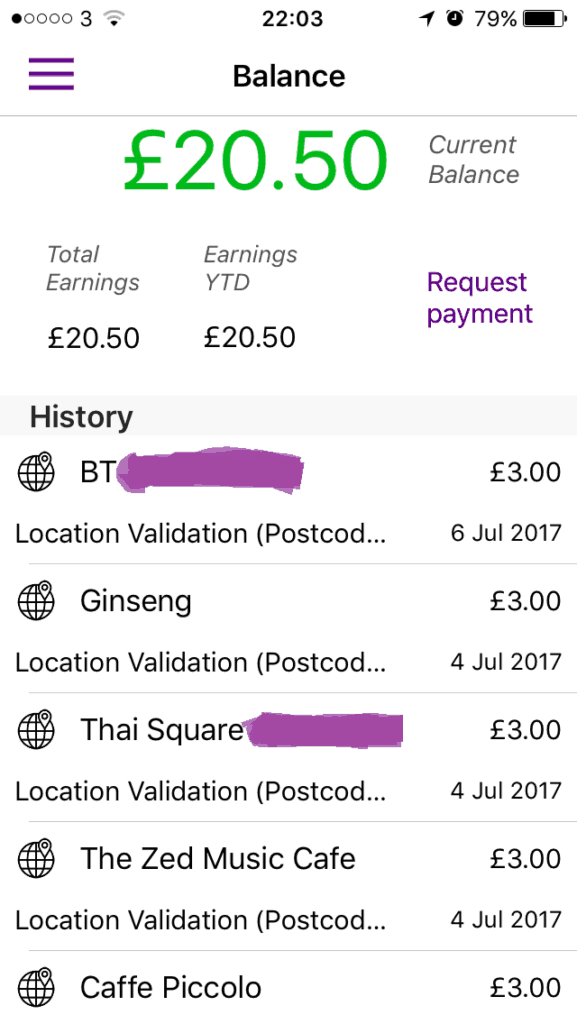 My first week was very quiet. I saw a handful of jobs come up in neighbouring towns, but nothing that fitted with my schedule (and there weren’t enough jobs to make it worth my time travelling).

In my second week, I was randomly offered a survey task. I haven’t seen any more surveys since then, so I’m not sure if it was a one-off. It only had three or four questions and paid £1.

The next week, I got a store audit task. This involved going into a high street pharmacy and checking that a certain brand of sun cream was on display. I had to take a couple of pictures of the sun cream shelves and do a quick walk around to look for special promotions. Happily, the pharmacy is right next to my office. The task took all of five minutes and netted me £4.50. Not bad!

The following week was a great week for Task 360! A whole bunch of ‘location validation’ tasks came up. For these, I was given the name and address of a shop or restaurant. I had to go to the location provided and confirm whether the name and address were correct. I also had to state whether any soft drinks were sold at the premises. The list they were working from was obviously very old because almost all of the shops had changed name or closed down! These were quite interesting and very easy tasks. I managed to complete five in my lunch break for £3 each. I was hoping to bag a load more after work, but they had all gone by that time.

Since then, nothing much… a few in other towns, but nothing worth my while.

It’s worth noting that I live and work in quite a small town, but I know people are earning a lot more in places like London or Manchester!

As you can see, Task 360 hasn’t been a huge earner for me in my location, but it is very easy money when tasks do become available. I will definitely keep this app on my phone and keep an eye out for new tasks.

Great pay and interesting tasks, but opportunities can be limited.

>> See this post for my top way to make money online!

4 thoughts on “Task 360 Review: Hit the Streets and Get Paid for Small Research Tasks”